Budget 2019 issued today, October 9th 2018 and unfortunately the promises made in recent years to address the pitiful inheritance tax thresholds were not kept. 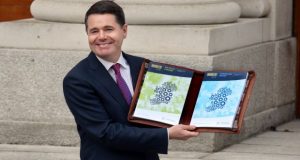 I’m not exactly surprised at the rather tame change to Inheritance Tax announced in today’s budget; an increase of just €10,000 for the Group A (parent to child) category. The government yet again focused on children inheriting from parents, and ignored other beneficiaries. A snub for childless people, whose beneficiaries can inherit a max of €32,500 before incurring a tax liability.

Group A – Parent to Child

More and more families have been struggling with the inheritance tax rate, which rose from 20% in 2008 to 33% in 2012. In addition to the rates going up, the tax-free thresholds reduced dramatically during the economic downturn. The threshold peaked in early 2009 when a child could receive up to €542,544* from a parent without paying inheritance tax (“Group A” threshold). In the course of the recession these thresholds reduced to just €225,000 from parent to child. With today’s Budget the threshold is now €320,000.

To give a quick example of the effect of these changes: Jack died and left his Estate to his two children, valued at €1m (no prior gifts). In 2009, the children would have had no tax to pay on the inheritance. With Budget 2019, the children’s tax bill will now be €59,400 each.

Any child inheriting from a parent who owns real property will still, realistically, have a sizeable tax liability despite today’s Budget change. The prospect of inheriting the family home, however valuable, remains a double-edged sword for most.

Groups B & C – other relationships

If you want to leave your estate to your brother or sister, or your niece or nephew, their tax-free threshold is up to €32,500 (Group B) each. Anything above this is taxed at 33%. The Group B threshold was €54,254 in early 2009. A stranger-in-blood can receive up to €16,250 tax-free (Group C). If an estate consists mainly of property it is likely the property would have to be sold just to pay the tax bill. This is extremely frustrating for child-less people who make up a large portion of the population. A 2014 OECD report showed Ireland had the 3rd highest rate of childlessness in the developed world at 18.4%.

*Prior gifts or inheritances received since 5th December 1991 are also taken into consideration when determining if a liability arises for a beneficiary.